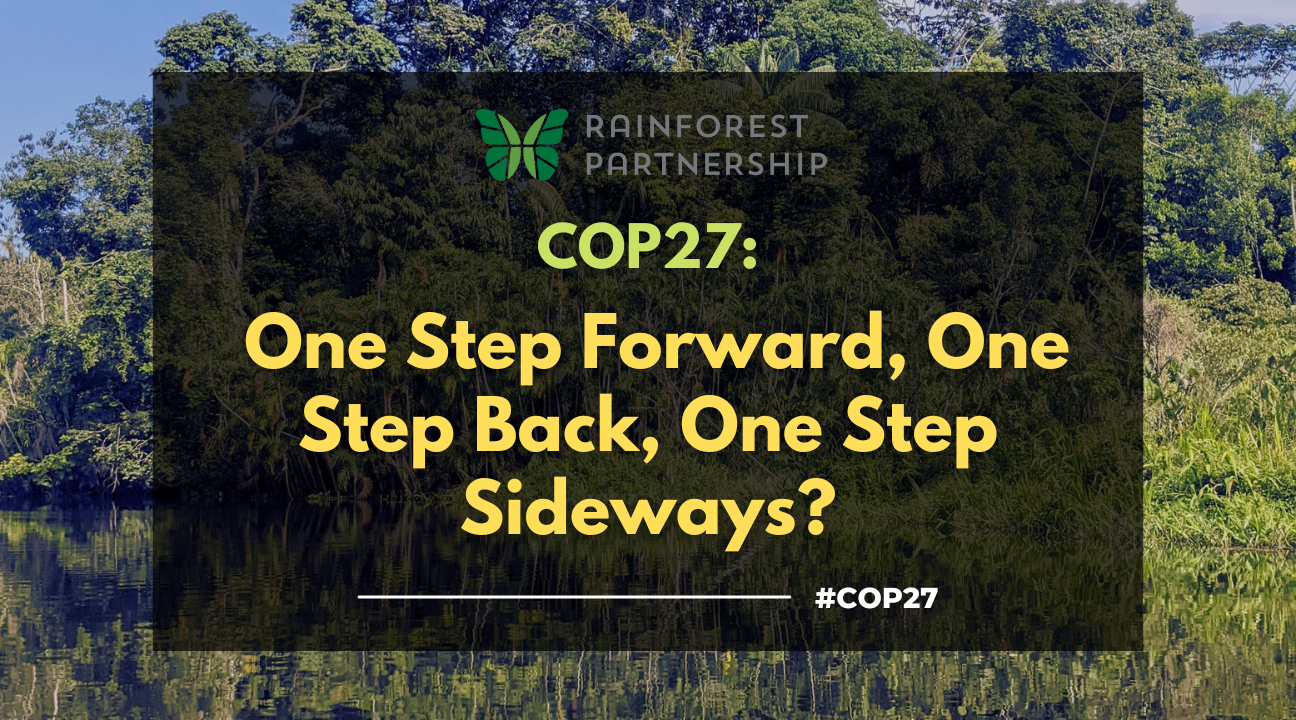 Surrounded by controversies and tension from the start, COP27 attracted a great deal of global and media attention. Justifiably so.

With only seven years left to attain the United Nation’s 2030 Agenda for sustainable development, with exponentially growing evidence of the effects of climate change on our planet, and with patchy implementation of pledges signed during last year’s COP26, expectations were unusually high for this year’s conference.

The 27th annual United Nations Climate Change Conference, more commonly called the Conference of the Parties (COP), just ended in Sharm El Sheikh, Egypt after two weeks of intense conversations and negotiations as representatives from countries around the world gathered to discuss global progress in dealing with climate change.

Building on the Promise of COP26

In a breakthrough moment for rainforest protection, a key pillar of climate action and Rainforest Partnership’s core mission, last year’s COP26 resulted in the promising Glasgow Leader’s Declaration for Forests. In the signatory, “world leaders committed to work collectively to halt, and reverse, forest loss and degradation by 2030 by delivering sustainable development and promoting an inclusive rural transformation.” (1)

Although this declaration has been a huge step forward, great progress remains to be made to meet the 2030 target of halting deforestation globally. Unfortunately, the same can be said of general climate targets, for which progress has been slower and patchier than what scientists agree is needed to keep our planet under the critical 1.5°C limit.

This is why COP27 was regarded as a definitive turning point, for global climate action and rainforest protection. But did this year’s agreements step up enough to meet the necessary standards to effectively keep the world from the 1.5°C mark while keeping our planet’s forests standing?

The answer, unfortunately, is not a simple yes or no.

Several encouraging announcements were made during this year’s COP, both for general climate action and for rainforests (2):

Despite the encouraging announcements, COP27 didn’t quite tick all the boxes.

Although some major commitments were made during COP27 and important steps taken on several important fronts—including deforestation, mangrove protection and restoration, renewable energy, water, gender equality, etc.—we are still falling short when it comes to tangible, radical action. Until actions match pledges and promises, we’re not moving forward; at best we’re running in place.

However, the protests surrounding COP27, the great alliances and partnerships formed during the event, the strong youth presence throughout the conference (and youth from the Global South), and the thousands of people, governments, and organizations mobilizing to change the course of our future bring us hope in these crucial moments of our history.

At Rainforest Partnership, we build the systemic change necessary to scale radical global action and impact to protect tropical rainforests, end deforestation by 2030, and lead the way to a thriving and balanced planet. Let’s continue working together to achieve this future for all.