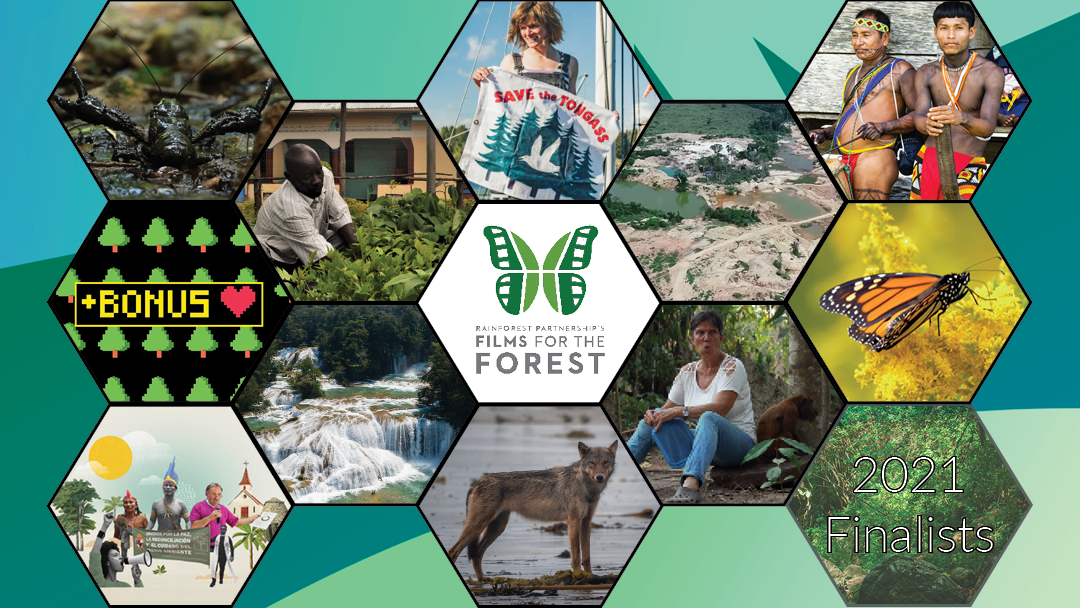 In celebration of Earth Day, Rainforest Partnership will debut the 2021 Films for the Forest film competition, a juried collection of eleven short films that highlight the importance of forests worldwide and the ongoing threats they face.

We created Films for the Forest in 2010 to answer these pivotal questions: “How do we connect people with the beauty and the magic of rainforests, while highlighting the threats they face? How do we share voices and stories directly from rainforests with global audiences?” says Niyanta Spelman, CEO of Rainforest Partnership.

“The answer was film, a powerful, visual medium that connects people to forests intellectually and emotionally.  Film meets people where they are and takes them on a journey, to new places, new people, new ideas, new experiences….and through all of that, new feelings of love, delight, concern and connection to the rainforest.”

For the second time, Films for the Forest will first bring this year’s winning films to global audiences by streaming online. Our 2020 streaming experience–a pivot made necessary by the pandemic–brought together thousands of eager viewers around the world for each screening.

This year’s 100-minute global livestream will showcase eleven films and launches on www.FilmsFortTheForest.org on Earth Day.

You can’t have peace, love & happiness without healthy ecosystems, forests and people able to provide for their families. Films for the Forest uses the power of story to remind everyone of the beautiful opportunity we have as humans to care for the earth and each other. --John Paul Dejoria

The 2021 global livestream will exhibit films from young rainforest activists, World Wildlife Fund, an indigenous tribe from Panama, and other unique and captivating stories.

Viewers from all across the globe can register for free on GiveLively to join the live stream. Registering for the event will offer the opportunity to interact with the filmmakers in Films for the Forest’s post- screening panels, dependent upon which screening viewers attend.

Our 2021 Films for the Forest theme is ‘Inspire Hope’. Over the past year the world has drastically altered. The continuous stress and change has left many lonely and struggling. I invite you to watch a screening of Films for the Forest on Earth Day and be inspired to find hope once again. --Niyanta Spelman

Films for the Forest 2021 Finalists

Too often, the food we’re consuming right here in the UK has direct links to the destruction of some of our most precious forests. This film debunks some of the top myths around deforestation.

Todd Walsh the lobster man has grown up with the giant Tasmanian freshwater lobster that gently inches its way around the northern rivers of Australia’s southern-most island. This is his plea to protect a rare and remarkable creature.

From the development of collaborative science and monitoring practices to the revival of an ancient Eagle Dance, this film is an inspiring model for conserving both a culture and a rainforest.

Call of the Coastal Wolves follows a group of filmmakers over a two week expedition as they endeavour to film the elusive wolf. This short film asks us to reflect on our impacts to the natural world as we witness these compassionate, loving animals that deserve more attention and respect.

The film is a story of the work of Interfaith Rainforest Initiative on education and awareness raising, mobilization of action coalitions across the country, influencing laws and public policies on forests, and exerting pressure on the private sector to change their policies and practices.

Magali Salinas has dedicated 15 years of her life to rescuing, rehabilitating and releasing wild animals in the Peruvian Amazon rainforest. She talks about her life and the struggles she faces in her work.

In 2018 researchers set out to investigate an ecological anomaly in Tabasco, Mexico–a coastal mangrove forest, thriving hundreds of kilometers from the ocean. A collaborative investigation of this phenomenon leads the scientists to discover a living relic, and begs more questions about its future as well as our own.

Monarch butterflies have one of the longest migrations of any insects, so they depend on critical habitat for their survival during their long journey. Organizations like the Pollinator Conservation Association are committed to protecting and restoring habitat to help save this iconic species.

They’re replanting their community in Mbale, Uganda as part of the Mbale Trees Programme. The project aims to plant 25 million trees across the region and to integrate sustainable livelihoods for the communities living in Mbale and the surrounding districts.

People now have access to drone technology to detect deforestation encroaching on their land, and as the dry season approaches, equipment and training to fight fires.

Films For The Forest was launched in 2010 by Rainforest Partnership as an international short film competition, and now serves as a nexus and convener for storytellers, changemakers and innovators worldwide to showcase their work and connection to forest and to speak for the forest.

Register to attend Films for the Forest for free!

More of Films for the Forest here

Why I Love World Rainforest Day