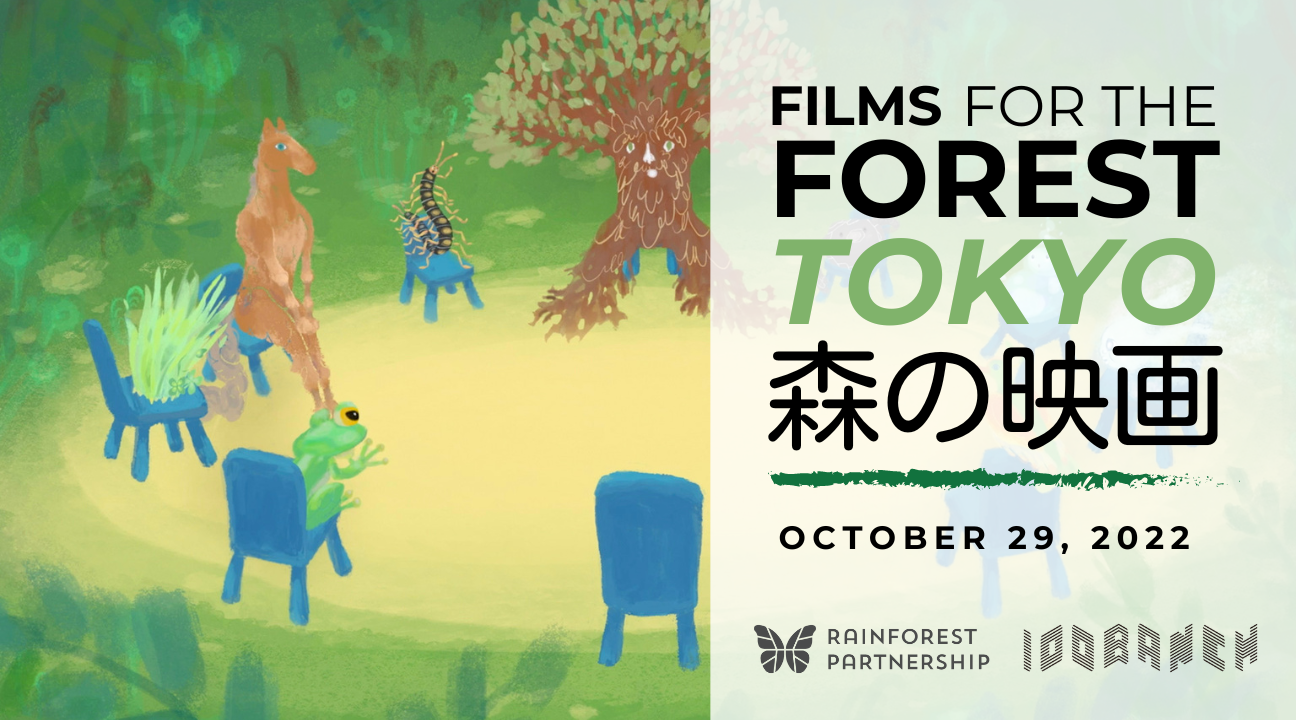 Rainforest Partnership will host a screening of “Films for the Forest” on October 29, 2022 at 100BANCH 3-27-1 Shibuya, Shibuya-Ku, Tokyo. The juried short film collection features 10 short films and uses the power of creative storytelling to convene, empower, and activate global audiences to take action on behalf of the world's rainforests. This is the first time a Film for the Forest event screening is being held in Japan.

The bilingual event (Japanese/English) will feature winning films from both the 2020 and 2022 Films for the Forest competition, brief video presentations by Rainforest Partnership team members, and an in-person presentation by filmmaker Yo Kohatsu, director of “Re-Member” (winning film in the animated shorts category, 2022). A networking event will follow the screening, with Latin-themed music and food and drinks for sale.

Tickets to the event are available online, and all proceeds will benefit our For the Forest fundraising campaign to further our impact for rainforests and all who rely on them.

Since Rainforest Partnership launched Films for the Forest in 2010, our goal has been to share the voices and stories of forests with people around the world to inspire hope and reflection. We want to move people to act.

In its own environmental policies, Japan recognizes the importance of protecting forests, and at the UN Climate Change Conference in November of 2021, Japan was one of 145 countries to sign the 2021 Declaration on Forests and Land Use, recognizing the importance of protecting this natural technology and committing to ending deforestation by 2030. We are especially excited to help foster connections among the growing conservation and sustainability community in Japan, a country with many primitive and secondary forests of its own, filled with biodiversity.

Screening Films for the Forest in Tokyo is a wonderful opportunity to share the voices and stories of rainforests worldwide and to help our audience understand the forests’ importance not only in their own communities, but to the entire planet. These films will highlight the immense beauty and rich biodiversity of forests, the local communities and indigenous peoples working hard to protect them, and the opportunities we have to renew and replenish the lungs of our planet.

The winning films were selected by a panel of celebrity judges, including Game of Thrones actor and environmental activist Iwan Rheon and Oscar-nominated filmmaker Richard Linklater, among others. Topics for the films range from the story of rare tamarin monkeys that live nowhere else in the world except the tropical rainforests in Columbia, to the perilous adventure of a lumber worker who has been sabotaged by environmental activists.

Event tickets can be purchased here.

Watch the trailer for Films for the Forest here.