Lessons from global crises: reflections on the war in Ukraine and the latest IPCC report 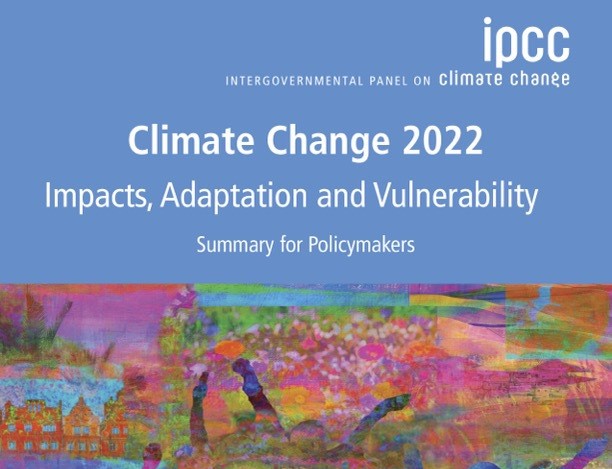 A couple of days ago I was browsing through a bookstore and I overheard a conversation between a man sitting behind the counter and a customer. “I’ll come back next week to buy it, unless we enter World War III and we all die”, the customer said, laughing nervously as she exited the bookstore with an awkward smile on her face. The man laughed uncomfortably as well as he greeted her goodbye.

As that scene played before my eyes, I was holding “Footprints”, an intriguing work by David Farrier that takes us on a meditative journey into the deep future that reflects on the way cities, nuclear waste, climate change and how humans are transforming the Earth’s geology and chemistry in ways that will leave tangible imprints, what he refers to as ichnofossils, for centuries to come.

At that moment, and having studied climate change for most of my career, I couldn’t help but wonder what was different between the threats posed by the absolutely disheartening Russian invasion of Ukraine and the threats posed by climate change. Why was everyone around me so publicly aware and worried about this (with good reason, of course,) but not also about the contents of the book that I was holding in my hands? After all, both nuclear conflict and climate change are major existential threats to humanity, capable of damaging human well-being on a global scale.

Let’s think about this for a moment. Since 2020, our collective lives have been rattled and radically transformed by the pandemic (another existential threat). We’ve learned how deeply connected our world is, and how fragile our systems are. I’d say with almost utmost certainty that virtually every one of the 7.9 billion humans on the planet has been somehow affected by covid. The speed with which we all learned about it, reacted to it to protect ourselves and develop vaccines and safety measures, and especially with which we knew our lives were endangered was unprecedented. And now the same is true of the conflict developing in Ukraine and the threats it poses.

Now, what do these two events have in common? Both are short term; both the pandemic and the Russian invasion have unfolded before our eyes, posing very real threats that have effects in time intervals that are very easy for our brains to comprehend. We feel a sense of urgency as we realize the immediate nature of these catastrophes and their devastating aftermaths.

So what is different about climate change?

Probably that it  hasn’t been portrayed in quite the same way, or that it’s effects haven’t been as easy to spot. That is, at least for now. Like an annoying task sitting at the bottom of our to-do list, we’ve been brushing off climate change,  procrastinating it, as if waiting for the moment when we feel the sense of inescapable urgency that finally prompts us to go get groceries or pay the bills that we’d been ignoring.

However, there is unequivocal and substantial scientific evidence that makes us completely certain that the climate crisis poses threats as devastating or even worse than the pandemic and the war in Ukraine, both in the short and long terms. The latest report issued by the IPCC, the Intergovernmental Panel on Climate Change, confirms that climate change has already impacted every inch of the world and that its worst impacts are yet to come, so long as we continue with business as usual.

The report points out that climate impacts are already more severe and widespread than anticipated. Even though we’re still below the 1.5 degree C threshold outlined by the Paris Agreement, the effects of 1.1 degrees of warming are being felt all over the world: droughts, floods, and extreme heat threaten food security and people’s livelihoods; over 20 million people have been displaced by flooding events and extreme storms since 2008; half of the world is facing water insecurity for at least one month every year; raging wildfires are changing landscapes irreversibly; higher temperatures are enabling the spread of vector-borne diseases like malaria; and species are migrating or becoming extinct.

The list of present and future effects of climate change goes on, confronting us with a bleak and unsettling picture of what our future could look like. Our planet could soon become unrecognizable. There is good news, however.

The report also lists adaptation measures that should be effective in avoiding the worst case scenarios of climate change, like implementing social programs that improve equity and justice, upscaling and implementing ecosystem-based adaptation measures and nature-based solutions, and developing new technologies and infrastructure to improve our responses to damages and losses caused by climate change.

But we need to act now. The report puts a clear emphasis on the need to scale up our actions, increase climate change finance worldwide, and implement widespread solutions immediately, since our window to act is getting narrower and narrower each year.

After leaving the bookstore I met a friend for coffee. We talked about the war, and how people have been responding in so many different ways all over the world, and how they are offering support. Some are giving tattoos to raise funds for Ukraine; others are cooking food in restaurants and makeshift shelters to feed everyone who needs to be fed; and yet others are dropping everything in a heartbeat to go fight for their country.

Much like what happened during the worst months of the pandemic, people are coming together, adapting and offering their generosity to help in whichever way possible to avert the worst effects of this war.

We humans have an incredible capacity to adapt. That is, after all, what has gotten us here, to the present we know. We also have great capacity to solve problems and to come together in the face of adversity. We have been proving it over and over, despite all the challenges we encounter. Now it’s time for us to harness our capacities and the valuable lessons we’ve learned from the pandemic and the current conflict to face our biggest challenge yet. If we don’t lose hope and we take immediate action, we can still course correct, and respond in an unprecedented way. If we act now, the “footprints” that we leave behind will still tell the story of climate change, but they’ll also serve as testimony of our survival, hope, and achievement.