My roots in the clouds: a lifelong mission to protect the mountains and cloud forests of the Tropical Andes 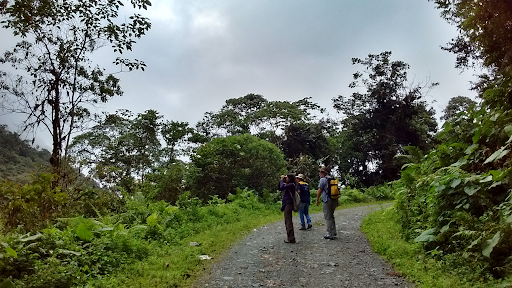 I grew up surrounded by mountains. To find my way around Medellín, my hometown, I’ve always used the mountains. Whenever I’ve gone hiking or on weekend trips with my friends, we’ve usually gone to the mountain. We’ve gone on hikes to the woods or we’ve hiked to a cold river and had a picnic by the water. We’ve also gone camping to the nearby páramos, where we’ve seen some of the world’s most beautiful sunrises. My dad and I used to go birding at the crack of dawn to the nearby cloud forests, eager to find birds that we’d never seen before. When we pay for buses or ice cream, the coins we use have the plants and animals that live in our mountains.

These mountains that surround us, the mighty Tropical Andes, are at the center of our daily lives. They’re not only present in everything we do, but they provide us with the air we breathe, the water we drink, and the food we eat. And that is true for everyone living in this part of the world, and even beyond the shadow of these towering mountains. The Tropical Andes is, undoubtedly, one of our planet’s most important places.

The name “Tropical Andes” refers to the area of the Andes mountain range in South America that falls right between the Tropics of Cancer and Capricorn. The name is also used to refer to the biodiversity hotspot that falls right in this area, covering an area three times the size of Spain, and extending from western Venezuela to northern Chile and Argentina, including portions of Colombia, Peru, Bolivia, and Ecuador.

Biodiversity hotspots are Earth’s most biologically rich and most threatened regions. The first forest hotspots were identified in 1988 by the British ecologist Norman Myers, who published an article that highlighted 10 tropical forests characterized by both having a large diversity of plants that were found nowhere else on Earth (also known as endemic plants), and being seriously threatened by habitat loss. Later, in 1989, Conservation International adopted Myers’ hotspots as a blueprint to guide their institutional decisions. In 1999, a global review of the world’s most diverse and threatened areas was carried out, and 25 biodiversity hotspots were identified. Today, 36 biodiversity hotspots are recognized worldwide, and they serve to guide many conservation and restoration decisions. Of these, the Tropical Andes is one of the largest and the most biodiverse.

The Tropical Andes contains around one sixth of all species of plants on Earth.

The Tropical Andes contains around one sixth of all species of plants on Earth, of which 30,000 are species of vascular plants. Over 50% of the plant species found in this area are also endemic, or found nowhere else. The Andean peaks are also home to the largest diversity of amphibians (980 species), birds (1,700 species), and mammals (570 species), with fish and reptiles following closely. Over 375 species of freshwater fishes are found in the area, and, like plants, a great portion of them are only found here, and nowhere else. This pattern repeats itself throughout the different groups found in the Tropical Andes: frogs, birds, mammals, and even ecosystems. Because of the region’s unique history and topography, speciation, or the evolutionary process that gives rise to species, happened over and over again, resulting in an area with hundreds of species that are found nowhere else on Earth. And that’s the ones we know of.

The region isn’t only rich in biodiversity but also in natural resources. Some of South America’s most important rivers and their tributaries are found here, where they provide water for numerous cities, including four capitals. Moreover, the Tropical Andes are also a hotspot of cultural diversity. Over 40 Indigenous groups live in the Tropical Andes biodiversity hotspot, playing an essential role in the area’s economy, politics, land use, and culture. These Indigenous groups play an essential role in the area’s conservation: more than 52% of the hotspot’s land area is owned or reserved for their communities.

The Tropical Andes are highly threatened by habitat loss. Although not all of the area is under immediate threat, many large cities are located within the hotspot, including the capitals of Ecuador and Colombia. As populations grow in the region, so do their needs for resources like water, wood, space, land for cultivation, food, timber, and infrastructure. As a result, this region is highly vulnerable and threatened by migration, population growth, deforestation, the construction of transportation infrastructure and dams, mining, hunting and illegal trade, and, most recently, by climate change.

Probably as a result of having grown up surrounded by these amazing mountains, my life choices have all led me to the desk where I write this blog post.

I chose to study biology and Earth sciences and to work in rainforest conservation because I felt a strong connection to my home, to the amazing ecosystems of the Tropical Andes; but, especially, because I felt that I absolutely had to do something to make a difference, to make sure that the people of the future could experience what I had grown up with. Through my position as the Education and Research Coordinator at Rainforest Partnership, I have the chance to work every day to bring people closer to this and other essential regions of the planet, to share knowledge with the world, and to make sure that people know more about how our lives are so deeply intertwined with nature. We depend on nature, and knowing and embracing this reality will help us build a better future. Restoring our relationship with nature and protecting areas like the Tropical Andes is our way forward.

Rainforest Partnership: a Voice for Forests at COP26

COP26 and a new Era for Forests : A Letter from Niyanta Spelman Rainforest Partnership's Founder and CEO